The American Dad Wiki
Register
Don't have an account?
Sign In
Advertisement
in: The Smith's, Female Characters, Characters

Francine Lee Smith (née Ling; formerly Dawson) (born September 26, 1967) is the tritagonist of the animated television series American Dad!. She is the wife of Stan Smith and the mother of Hayley and Steve. Francine is voiced by Wendy Schaal.

Francine is known widely as the stereotypical housewife. She enjoys cleaning dishes and doing laundry. She even scolded Stan for keeping her locked in the basement and not giving her any laundry to fold, saying that she "hates down time".

Although Francine does not have a job (she even admitted that she dislikes being a breadwinner), she has engaged in different employments. Such as when she briefly managed a muffin kiosk and acncted as a surgeon for a handicapped mafia. She also became a very successful Realtor.

Francine is also very humorous, as it was revealed in 'White Rice' that she was formerly a stand-up comedian. She resorted back to doing stand-up and FOX offered to premiere 6 episodes of a show based on her stand-up.

A very prominent part of Francine is her dark side. Francine has been shown to go through extreme and creepy lengths to reach her goals, such as when she chopped off her own hand in an effort to kill George Clooney. She may even do harmful acts just because someone asked her, like in 'Live and Let Fry', when Roger asked her to kill and deep fry a baby chick and later a rabbit and was hardly reluctant to do so.

An underestimated trait of Francine is her intelligence. Many people claim that she is not smart, although she actually just shows unawareness of things happening around her. She has, quite often, shown to be exceedingly intelligent, often proving to be one of the smartest characters on the show. An example is in 'Stan Time', when Francine was able to grasp a vast amount of knowledge about marine life. She is often acknowledged as the only brains of the family.

Francine has often been found by many men (on some occasions women) to be extremely attractive. Francine has fair skin, pink lips, and blonde hair. Francine's normal attire consists of a pink gown with straps and pink high heels to match. She also wears a gold necklace. At night, she wears a pink nightgown. When cooking, she'll either wear a light pink apron with purple flowers on it, or a red apron with green along the edges.

● In episode 'Shallow Vows', Francine decides to discontinue her weekly, grooming regimen where she maintains her appearance so as to please Stan, thus revealing that she is actually a natural brunette after Stan notices that her roots were starting to show. Near the end of the episode, Francine is humorously depicted as overweight and unkept, with noticeable body hair and even a thick unibrow. In season 1 and 2

Francine in a bath robe. 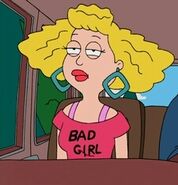 The inspiration for countless fan-fiction 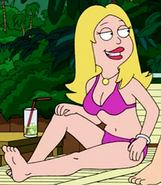 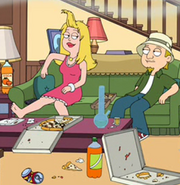 Yep, he jizzed in her hair. 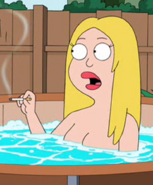 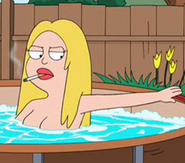 Before she had kids