The American Dad Wiki
Register
Don't have an account?
Sign In
Advertisement
in: Characters, The Smith's, Male Characters

Roger Smith is the deuteragonist of American Dad!

Roger is a narcissistic alcoholic sociopath who usually only has his own interests in mind, which is caused by his species "needing to get their bitchiness out". He does on occasion do some selfless acts, such as saving Stan's life at the CIA,and willing to be sacrificed to save the Smith's from torture. On one occasion his caring for a girl named Judy Panawits actually caused one of his personas to break free. He often dresses in varies  of costumes and takes on different personalities for each. Roger seems to like to dress like a woman, and does it very often.

Roger was sent to earth 60 years ago. Not much is known about life on his planet except that it was covered in ice, and was alot like earth, having said to have colleges, department stores and asians. They told him they were sending him to be the decider of earths fate, but in reality they were using him as a crash test dummy. While on earth Roger has claimed to have been close with many celebrites, such as Phillis Diller. Roger also invented disco because of a tape left behind when Stan was time traveling with the ghost of christmas past. He was eventually captured and held at Area 51 where he ended up saving Stan Smith's life. Stan was so grateful that he let Roger live with the Smith's, presenting him to the family as a birthday present for Steve. He is now considered a member of the family.

Relationships With Other Characters[]

"This photo is a total kooze magnet, and it won't scare off any wang either." - Roger

Roger and Steve are best friends.

they are usally annoyed at each other but once roger had a crush on her.

There are mentions of Roger's sexuality on the show that he is pansexual.

Roger raped his checkbook and diary.

Roger had a crush on Deddie.

Roger had a crush on Hayley.

It has been shown several times that Roger is attracted to Steve. Steve thought Roger was Elisha Wilkner who later went on 7 dates; in reality 9 since Roger roofied Steve on 2 of them and later found out by Roger that is was her.

It's been hinted that Roger raped Stan in The Great Space Roaster.

In You Debt Your Life, Roger says that Stan found another pansexual non-human. Which means Roger is indeed, pansexual.

Roger commits several criminal acts and show no care to what he does.

Several episode show or mention Roger killing people for various reason. In "Virtual In-Stanity", Roger kills five guys over 20 dollars and causes a plane to explode and killing most on board. Roger also kill the surviving stewardess in a parachute by undoing her chute causing her to fall to her death. He also claims he killed six guys over 19 dollars.

In "Great Space Roaster" he kills two dozen guards and made a raft out of their corpses to escape Bang Kwang Maximum Security Prison. Roger also try to kill the Smiths in the same episode.

Roger in "Why can't we be friends" brutally attacks and robs Jeff four time, the fifth time Jeff shoot Roger to defend himself.

He hits Stan with a chair in "Office Spaceman".

He bit Stan's finger off in "The Return of the Bling".

He stole a limousine in "Virtual In-Stanity".

He stole Pepper, a dog, from a girl in "Daddy queerest".

Roger claim to using or owning drugs in a number of episode. In "Great Space Roaster" it is reviled that Roger is on the following drugs: cocaine, heroin, ecstasy, crack, steroids, and several more.

Personas That Roger Has Adopted[] 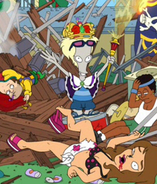 The Phantom likes a catchy tune. 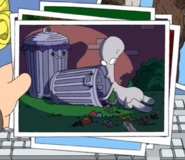