Snot is arguably the second most normal of the group of friends, being perhaps less confident than Steve, but is otherwise a fairly normal teenager.

Snot once had a falling out with Steve over his affair with Steve's octogenarian girlfriend, and they both agree that she is sexy. Other fights have included Steve stealing money from Snot to support his energy drink addiction, resulting in Snot as well Toshi and Barry attacking Steve physically. The most damaging factor that endangered Snot and Steve's friendship was when Steve sought to ruin another boy over a fight of his girlfriend Debbie, to which Snot mistakenly was accused of stealing from this boy and faced excommunication from his Jewish synagogue. Snot was acquitted when Steve confessed that he stole out of spite and Snot had nothing to do with it. Snot was clearly aghast at Steve for putting him in a perilous situation, but their friendship resumed when Steve sold much of his old toys in order to raise money to provide an excellent Star Trek-themed Bar Mitzvah for Snot. A lesser rivalry emerged over an attractive Russian girl named Svetlana, which was between all four boys, not just Snot and Steve. The fight was resolved when it was decided Toshi was the most suitable man to marry Svetlana. Snot has had a short relationship with Jenny Fromdablock, one of Roger's personas where he believed he lost his virginity, but it turned out Roger was using a stress ball with a cut in it to fake the sex. In the end Roger fakes his own death by using his ability to move very fast to make it seem like he got hit by a bus.

Snot's voice actor, Curtis Armstrong is best known for playing the part of "Booger" in the film "Revenge of the Nerds", from which Snot's name and appearance is an homage. However Snot and Booger's personalities are quite different.

Snot can speak Klingon and Elvish. And in the episode American Dream Factory he is se playing bass guitar.

The only member of Snot's family to be seen so far is his mother, Ms. Lonstein. In "The Magnificent Steven" Steve remarks that she has a wooden foot. In "Moon Over Isla Island" she possessed a few stereotypical Jewish qualities. In "Best Little Horror House in Langley Falls" Snot talks about his mother sleeping around a lot, and having some type of STD, she even sold Snot's Halloween costume to buy dental dams. In "Don't Look a Smith Horse In The Mouth" Steve says to Snot "Maybe we can go to your house and play 'let's watch your mom sober up before she has to go to her nursing job!'"

Snot's father is implied to have left them, and in "The Magnificent Steven" Steve says that he shot Snot's mom in the face with a flare gun. but he was never seen again after that or before

In the episode "Licence to Till" we are introduced to Snot's uncle Soloman, a cabbage farmer. Snot, Toshi, Steve and Barry are supposed to help him take in the harvest, but Steve takes the tractor so that he can be the designated driver to the popular kids. When Steve and Snot come back with it runs out of gas, and they can't bring in the harvest. Many cabbages were lost.

Steve is Snot's best friend. In "Licence to Till" he tells him he regards his friendship higher then Toshi and Barry. However Snot and Steve tend to turn on each other more then anyone else. Such as in "Licence to Till" and "Helping Handi's" when Steve abandons Snot for the popular kids, Snot also turns on Steve in "Chimdale" and "Con Heir". In a deleted scene from the episode Chimdale Snot claims to have nightmares about Steve's penis.

Snot often appears to be outwardly angered by Barry's lack of understanding of the world around him, often seen rolling his eyes at his remarks. He even out rightly slaps him and tells him "being stupid's gonna start getting painful" in the episode "Home Adrone".

In [Con Heir, Snot makes out with an elderly woman named Gretchen.

In "Failure Is Not A Factory Installed Option," Snot, Steve, Toshi and Barry attempt to romance a group of girls who are basically their female counterparts. At first, things go okay because Stan bought a bunch of cars that the kids sit in while watching movies that Roger projects onto the side of the neighbours' house. However, at the end of the episode, the girls leave them when the cars get repossessed.

In "The 42 Year Old Virgin," Snot, Toshi, Barry and Steve are tricked into getting into a van with molesters at the "Young Wet and Wild" water park before being saved by Stan.

In the episode "The Magnificent Steven," everyone has to tell someone a secret during gym class. Snot's is that his therapist says he's a bad kisser.

In "Moon Over Isla Island," Snot is pulled out of the Smith's pool by Francine and accidently gets a face full of her breasts. Steve retaliates by attempting to touch Snot's mothers breasts, but ends up having her head touch his genitals. Snot attempts to have Francine touch his. Snot ends up taking out the doorknob in Stan and Francine's bedroom and hanging off the back of the door so that his erect penis sticks out the hole, which Steve grabs, mistaking it for the doorknob. When he realizes what he is holding, he remarks "I can feel your heart beating."

In "G-String Circus" Snot, Steve, Toshi and Barry go to space camp. While they're away, Stan has a group of strippers stay with them so they can work at his dry cleaners. Roger sends Steve and his friends a video of them in Steve's room and has two of them kiss each other, to which Steve replies "They're kissing where we practice kissing".

In "Licence to Till" Snot and Steve kiss each other on the lips before getting on the tractor.

In "Merlot Down Dirty Shame" it is revealed that Snot has a crush on Hayley. This is later explored further in "Jenny Fromdablock" where it is revealed that he has had said crush since he was four. In the episode he spends all of his Bar Mitzvah money trying to win her over, but ultimately gets his heart broken. Also in this episode, Snot has sex with Roger while he's in his persona of Jenny Fromdablock, Steve's Jersey girl cousin. However he technically is still a virgin due to the fact that he was really having sex with a stress ball, rather then an actual reproductive organ (human or alien).

One running joke throughout the series is that Snot gets erections from very customary things including pillow fights and airplanes. In "Moon Over Isla Island" Steve tackles Snot so that Francine's hand won't touch his genitals. When Steve asks why he isn't getting up, he says "I have to wait for my wrestling rager to go down. It's totally natural, my coach told me while I was having brandy at his house." This hints that he may have been molested by his coach (or has a drinking problem). Age 31 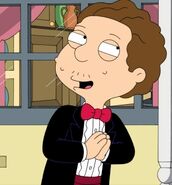 Snot as "Mouth" from "the Goonies". 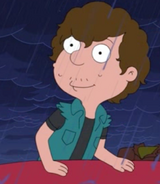