The American Dad Wiki
Register
Don't have an account?
Sign In
Advertisement
in: Characters, The Smith's, Male Characters, Villians

Stanford Leonard "Stan" Smith (born November 22, 1967) is the titular main protagonist of the adult animated sitcom American Dad!. He is voiced by the series' co-creator and executive producer, Seth MacFarlane.

Stan Smith works for the CIA. He is stubborn, selfish, and very cool.

Stan's character is very complex. Although Stan takes pride in his self-righteousness, his practicing morals are sexualy oritated zest. Several episodes contain story twists that involve a radical change in Stan's personality and/or behavior. Sometimes this change is genuine, though sometimes Stan fakes the change (meaning he flat-out lies). Stan, like many animated sitcom characters, is prone to learning a lesson or moral at the end of an episode. However, just like all those other characters, he's pretty much back to his old self at the start of the following episode.

Stan also has a tendency to act like a douchey frat boy sometimes. In Spring Breakup, Stan adopts a frat boy persona at Scotch Bingington's spring break party while hanging out with college girl Jessica. In Bully For Steve, Stan says "You T-boned me, bro!" to Francine, after she rams her car into his. That's right - he called his wife "bro." His use of the word "bro" doesn't stop there. In The Worst Stan, Stan unfolds a plan wherein he lies to Brian Lewis about their chicken wings containing bones. After he saves Brian from choking, he says "You almost died, bro!" The next few lines of dialogue that they speak each end with the word "bro." Stan convinces Brian that he doesn't want to die alone and should get married. All this, just so Stan can finally be somebody's 'best man' in a wedding ceremony.

Ah, Stan and his many convoluted plans! He always feels that the ends justify his means, whether he's living below the poverty line in a Pontiac Aztec in order to teach Hayley a lesson, framing Francine for a murder his boss committed, bullying Steve into standing up for himself, using the CIA to confiscate his neighbors' homes for not liking him, or digging up his house to find Oliver North's hidden gold.

Stan is also prideful and arrogant and sees his family as being an annoyance, but despite this he learns to live with them and tries to be a good father.

As many faults as Stan Smith has, he also comes across as an enduring and even sympathetic character. His weaknesses as a person actually become strengths for his character, which means that while I'm glad he's not my dad, he's incredibly entertaining to watch. And in season one and two he’s mentioned to be 33 by Francine and she also says that she’s 32 in the same episode and later he’s 41 and 42 and then he’s 51 and in the current now he’s 58 like Klaus

Relationships With Other Char[]

Hayley is Stan's daughter. He usually tries to control her and they bicker often. Stan at one point called her a "lost cause."

Hayley is responsible for sparking Stan's fanatic enthusiasm for the band My Morning Jacket.

Jack is Stan's father. In Con Heir he worships him, but in Jack's Back he seems to be a bit skeptial about his motives.

Jack has neglected Stan by walking out on the family when Stan was eight years old.

Stan is a complicated man. 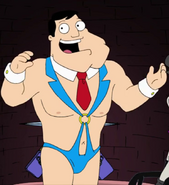 "When fully erect, it gets this big!" 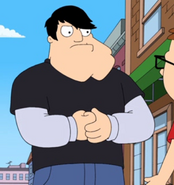 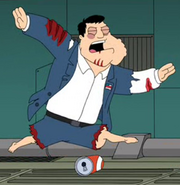 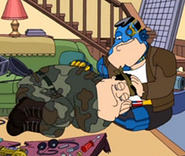 "Eat those puppies, Stan. Eat them til you're full." 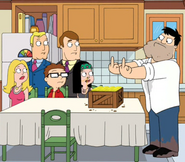